Carbs play a vital role within the body for numerous reasons. Insufficient carb intake will result in protein breakdown and loss of muscle mass. Carbs act as a metabolic primer, meaning, carbs are needed to breakdown fat. Aim to eat carbs that contain a low GI index.

Like most people, I’m sure,  I attempted to give up carbs at one point in my life. It lasted approximately 18 hours…. and, let me tell you,  it was not a fun 18 hours. It’s easy to get caught up in the amount of carbs you’re eating as low carb, or no carb diets seem to be all the rage these days as a way to lose weight, fast. Well, I have great news for all carb lovers – carbohydrates are not your enemy – they may even be your best friend. 😉

I now know the importance of adequate carb consumption. Carbs play a vital role within the body for numerous reasons, such as maintaining adequate energy levels, maximizing immune function, and optimizing athletic performance. Your body uses carbs to make glucose. Glucose acts as the body’s primary source of energy  to fuel day-to-day activities, such as providing energy for nervous tissue, like the brain.

Carbs also act as a protein sparer. Carbs help preserve tissue protein by reducing its breakdown. If you don’t consume enough carbs, your body will resort to breaking down protein in an attempt to create glucose to fuel the body. Not eating enough carbs will result in protein breakdown and loss of muscle mass.

In addition, carbs act as a metabolic primer, meaning, carbs serve as a “primer” for fat oxidation (breakdown). Without carbs, fatty acids cannot be metabolized efficiently. If you do not have adequate amounts of carbs, you cannot fully utilize and breakdown body fat. Carbs are needed to breakdown fat!

Excess glucose can be stored as glycogen in both the liver (~100g) and muscle (~300g). These stores are used when the body is low in glucose. Depletion of these stores can cause low blood glucose and muscle fatigue. Therefore, it is important to eat adequate amounts of carbs to ensure these stores are never depleted.

If you’re still not convinced, try carbs that have a low glycemic index (GI). The GI is a relative ranking of carbohydrate containing food and drinks and indicates the effect that these carbs have on ones blood glucose levels (a GI value of 100 represents the standard equivalent of pure glucose). Foods that contain a high GI increase blood sugar higher and faster than foods with a low GI. Low GI foods (whole grain products, bran, quinoa, sweet potato, steel cut oats) should be chosen most often, and have a GI of 55 or less. Medium GI foods (rye, basmati, cream of wheat, instant oats) range from 56-69, and high GI foods contain a GI of 70 or more (white bread, corn flakes, instant rice) – these foods should be chosen least often. BUT, always remembering, everything in moderation … including moderation!!! 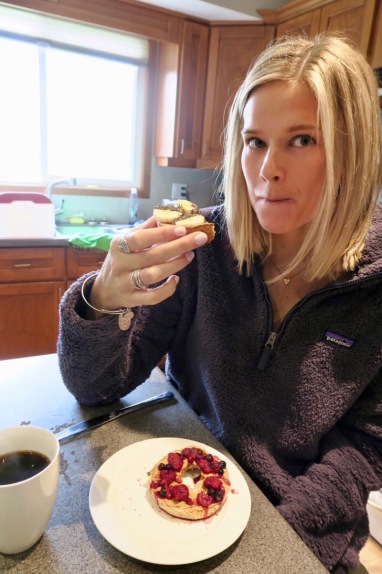